Balance Recovery Part One: The Crisis

Unless you have been living under a debt-free rock lately, then you are more than likely aware of the rising debt in our nation’s lunch programs. In SNA’s 2019 School Nutrition Trends Report, it was revealed that 75% of districts surveyed reported having unpaid meal debt at the end of the 17-18 school year. Unpaid meal debt has been a hot topic of conversation for a while now, not just within the industry, but across the country. There are several stories from across the nation about generous donations, angel funds, and student-run fundraisers dedicated to helping out those students who have insufficient funds in their lunch accounts.

We have heard the horror stories of lunch shaming, a method of debt collection in which the student is publicly humiliated in front of their classmates from a refused lunch or alternate meal. We have shamed the idea of lunch shaming itself, and rightfully so because we want our kids to be able to eat. The underlying problem though, is the debt. Our current methods of debt collections have sent us into a vicious cycle where all students are now fed, but schools are not paid. Kids no longer go hungry during lunch, but the debt problem continues to grow. 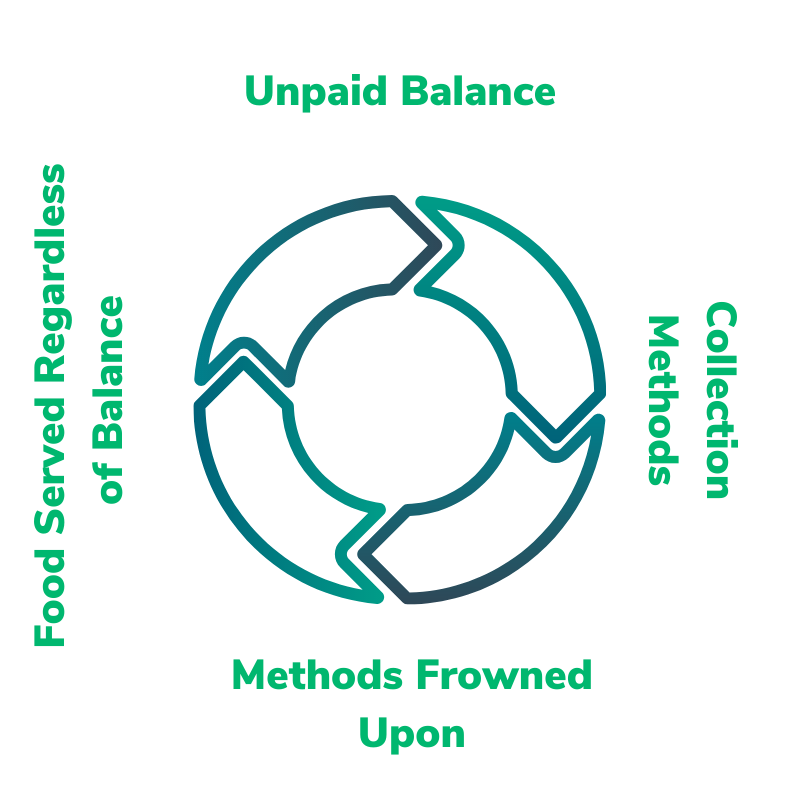 In the same previously mentioned report, SNA found that median amount of unpaid meal debt per-district rose by 70% since the 12-13 school year. Lunch shaming isn’t the only culprit to the unpaid meal debt crisis. In fact, some of the solutions could actually be causing more harm than good. While the generosity of our local communities from donations, angel funds, and fundraisers has been extremely helpful in lowering some of the debt, it is the equivalent of using a bandaid to fix a leaky pipe. It’s nothing more than a short term solution.

Unfortunately, because of the media hype behind this conversation, many parents are becoming aware of these “solutions” and hoping the responsibility will shift on to someone else. They figure that eventually the generosity of others will be applied to their child’s accounts and the debt will be erased. However, this obviously isn’t a reliable method of payment and only allows those negative balances to grow.

So how do we recover? Check back for part two for proposed long term solutions.

Alex Szoeke (zo-key) is a marketing specialist at PrimeroEdge. She holds a bachelor's degree in corporate communications from the University of Houston and a certificate in full stack web development from the UT Austin Coding Boot Camp.