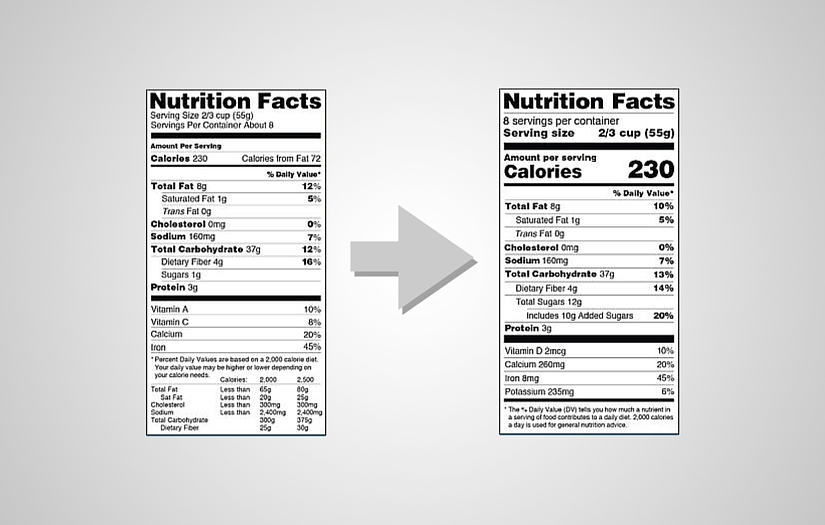 On Friday, First Lady Michelle Obama announced major changes by the Food and Drug Administration (FDA) concerning nutritional labels on food packages. Untouched since the early 1990s, the announcement marks significant updates that health advocates have argued are long overdue. Over 50% of adults use nutritional labels when making purchasing decisions, but some have claimed the labels are overly complicated and downplay important information, such as realistic serving sizes.

Susan Mayne, director of the FDA’s Center for Food Safety and Applied Nutrition, told reporters, “The intention is not to tell consumers what to eat, but rather to make sure they have the tools and accurate information they need to choose foods that are right for themselves and their families.”

While talks to change the label began in 2010 with Michelle Obama’s “Let’s Move!” initiative, many in the food and beverage industry fought any updates, especially those including information on added sugars. Ultimately, however, it looks as if the FDA came out victorious.

At first glance, the new nutritional label looks relativity similar to the previous – ironic considering the controversy surrounding the changes. The largest change, literally, is the increase in size for calories per serving. Once the same size as the other nutritional information, calories are now front and center at the top of the label.

Speaking of the top of the label, serving sizes have been updated to better reflect portions Americans actually eat. As the FDA puts it, “What’s considered a single serving has changed in the decades since the original nutrition label was created. So now serving sizes will be more realistic to reflect how much people typically eat at one time.” 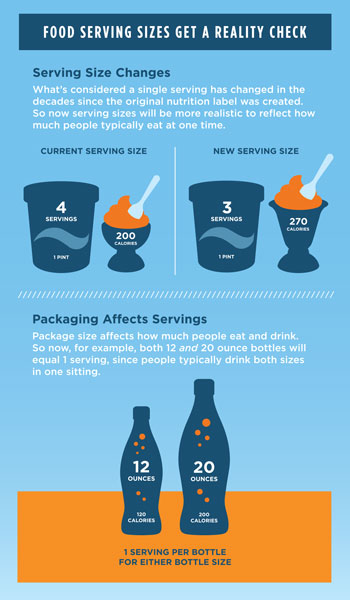 Because people typically drink entire bottles of a drink in one sitting, the new label will regard a bottle, regardless of whether it is 12 ounces or 20 ounces, as a single serving. Some have argued increasing serving sizes only adds to the obesity epidemic, but the FDA dismissed those criticisms saying, “…the serving sizes must be based on the amounts of food and drink that people typically consume, not on how much they should consume.”

The most controversial change, however, is the addition of the line for added sugars. The previous label did include information on total sugar, but did not distinguish between natural occurring sugars in food, such as sugar found in fruit, and those added in the manufacturing process. Because Americans get over 13% of their calories from added sugars, it can become increasingly difficult to also eat foods with enough dietary fiber and essential vitamins and minerals while still staying within calorie limits.

The Sugar Association criticized the changes in a statement released Friday. “The extraordinary contradictions and irregularities, as well as the lack of scientific justification in this rulemaking process are unprecedented for the FDA.” They went on to say, “We are concerned that the ruling sets a dangerous precedent that is not grounded in science, and could actually deter us from our shared goal of a healthier America.”

Not all interest groups were as critical of the new changes. The Grocery Manufacturers Association, representing both food and beverage producers, favored the changes saying, “This update is timely as diets, eating patterns and consumer preferences have changed dramatically since the Nutrition Facts panel was first introduced.”

Manufacturers will not be required to make changes until July 26, 2018. Smaller manufacturers – those with less than $10 million in annual food sales – will receive an additional year to convert to the new labels.

Michael F. Jacobson, Executive Director of the Center for Science in the Public Interest, believes the changes – especially the line for added sugar – will help people make better nutrition choices.

“A lot of people will be shocked to see how much sugar is in soda,” he said. “Teachers and parents will leap at that as something to show their kids.”