Skip to content
The New Kids In Class – Part 1: Who Are Generation Z? 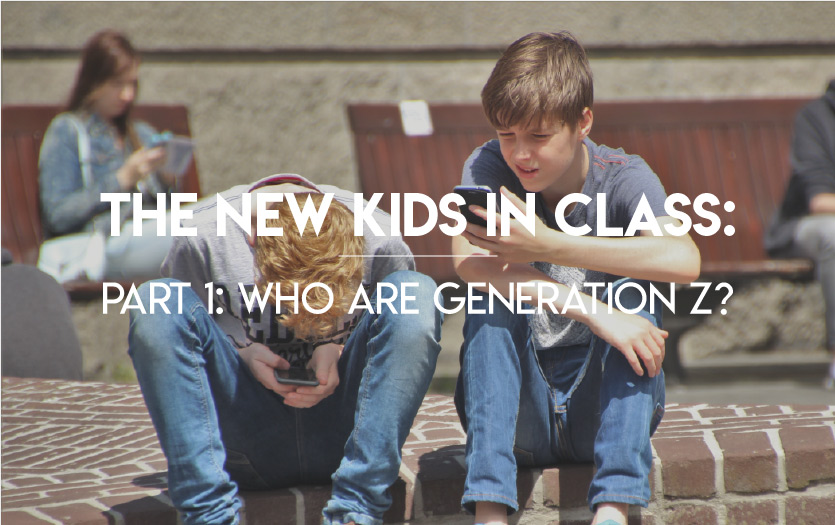 Forget Millennials, Generation Z are the new kids on the block.

Generation Z (commonly called Gen Z, or the iGeneration) are the latest generation following Millennials, and they’re big. According to Forbes, Generation Z make up 25% of the U.S. population – outnumbering both Baby Boomers and Millennials. While Millennials are getting all the attention, Generation Z have been growing in numbers.

Generally, Gen Z’s are described as being born between the mid-1990s to mid-2000s – leaving the oldest to start graduating college and enter the workforce. In other words, Gen Z are the youngest generation that make up school-aged children.

After age, what defines the iGeneration? Growing up in the wake of September 11 and the Great Recession, Gen Z are more cautious yet have an entrepreneurial spirit. Also, they tend to be more independent than Millennials. While Generation X and Millennials are familiar with technology, Gen Z have grown up with screens in their hands – leading to their nickname ‘Digital Natives’.

In Generation Z Goes to College, Corey Seemiller found that Gen Z desire practical learning in place of things they can easily find online and prefer to work independently compared to group learning. For schools this could mean rethinking how they structure their curriculum. As for cafeterias, it could mean an end to the typical lunchroom experience.

Being accustomed to choice and preferring independence, school cafeterias need to offer Gen Z more than just the predetermined lunch meal. Schools that offer students choice – either through build-your-own salad bars or smoothie stations, see an increase in participation. Why? Generation Z aren’t willing to accept prepackaged meals – they’re the Chipotle and Netflix generation. They haven’t been exposed to watching whatever is scheduled on television or the radio, instead they choose exactly what they want and when they want it. Schools looking to keep up need to adapt if they want to prevent losing students to the Chipotles of the world.

Along with choice, Gen Z – and Millennial parents – value health and nutrition. While you might not expect it, between 40 to 60 percent of students age 6 to 12 are concerned with their nutrition and how much they weigh. There’s a reason more and more restaurants are focusing on healthier food options. It’s true cafeterias are serving healthier meals after the passage of the Healthy, Hunger-Free Kids Act (HHFKA), but schools need to go a step further by making nutritional information easily accessible.

In this day and age it’s almost a requirement for restaurants to share the calorie information of their foods. School cafeterias should think no different. With Gen Z students and Millennial parents both accustomed to instant knowledge via the internet, school cafeterias need to consider sharing their meals’ nutritional information or risk losing students to home-packed meals or eating lunch off campus.

For more on how to share your school cafeteria’s nutritional information, see SchoolCafé.

In part 2 of The New Kids In Class we’ll discover exactly why Gen Z are called ‘Digital Natives’ and how traditional forms of marketing to students might not be successful if schools are looking to expand their cafeteria’s reach.