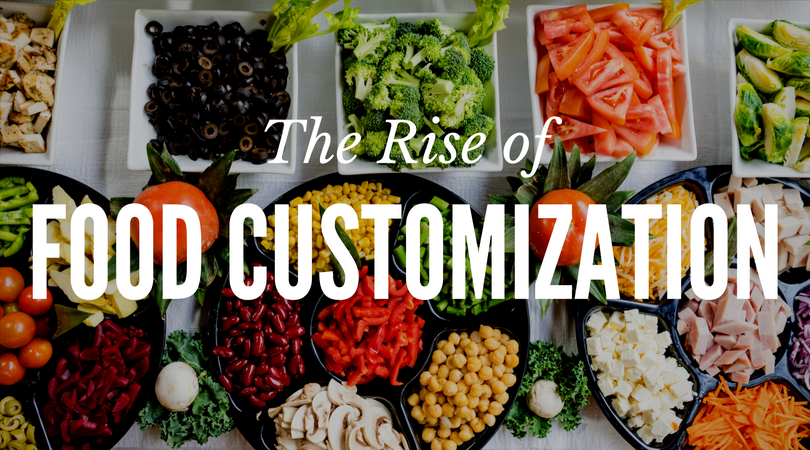 In the foodservice industry, food customization has become the latest rage.

Rather than picking the perfect meal from a massive menu, many restaurants prefer to walk you through the food customization process.

Today’s consumers (we’re looking at you, millennials and Gen Z) want food items that are fresh, creative and made just for them. In fact, more than a third of those born after the Y2K bug destroyed society order something different every time they visit a restaurant. When it comes to variety, 72% of ALL consumers expect food customization.

The Rise of Food Customization

Research shows that a large number of menu options makes people less likely to pick something and be less satisfied with their choice if they do pick something. Think of trying to select a cereal at a major supermarket or even worse, the car with every exact option you’d like.

Presented with so many choices, people often fall into an ‘analysis paralysis’ and become aversive to picking anything at all.

In response to this, many in the food industry have moved away from the mass customization model. Instead, they walk you through the customization process. Although it’s fun to look at a 250-item menu – ahem, Cheesecake Factory… – people find it much easier to make a few simple decisions by breaking down the components of a meal.

When it comes to the have-it-your-way generation, customization is key.

Although it may seem like a new concept, you might be surprised at how long food customization has already been “a thing.”

Let’s take a look at some popular restaurants and break down the keys to their success with food customization.

A staple of every airport, food court and just about every city block, Subway has played the long game when it comes to customization.

Founded in 1965, Subway’s food philosophy was simple. Sell one core product, the submarine sandwich, and allow the customer to build it to their liking. Since the 60’s, Subway has since added additional menu items. But, they still offer a simple, assembly-line operation where the customer creates their own cuisine.

For those of you who are coffee aficionados, I’m sure you have a very precise way you like your brew served.

In fact, Starbucks boasts more than 80,000 drink combinations. Although they don’t necessarily follow a “true” food customization model, brand fans have taken it upon themselves to create their Goldilocks beverage.

The first Starbucks opened in Seattle, Washington in 1971. Initially, growth was a bit slow. By 1986, the company only operated six stores in Seattle.

Howard Schultz purchased the company in 1987 and began massive expansion. By 1989, 46 stores existed in the Northwest and Midwest. The popularity of customizable coffee continued growing, with 140 stores in 1992. In 1996, Starbucks went international and now has a presence in six continents and 74 countries.

Founder Steve Ells, a Culinary Institute of America grad, observed the popularity of San Francisco taquerias and opened the first location in Denver, Colorado in 1993. The concept was so popular, it caught McDonald’s attention. After a major investment, Chipotle grew to more than 500 stores in less than a decade.

So what’s the secret sauce to success?

Customers then select their own meat (or meat substitute), and additional toppings such as rice, beans, salsa, sour cream, cheese and veggies.

Let’s take a look at the breakdown…

Let’s factor in some salsa combinations as well:

Once we do some simple arithmetic, we find that there are actually 76,800 menu possibilities at Chipotle – with only 34 ingredients in stock!

When asked in 2007 about expanding the menu, Steve Ells explained:

“It’s important to keep the menu focused, because if you just do a few things, you can ensure that you do them better than anyone else.”

Customization allows kids in your cafeteria to feel like they’re in control – and since they’re more independent than previous generations, putting the power in their hands is key in winning their business. Now that you’ve decided to completely customize your cafeteria to take on the likes of Chipotle and Subway, here’s some things to help you get started.

Give your students a hands-on approach to food by trying customization in your cafeteria!